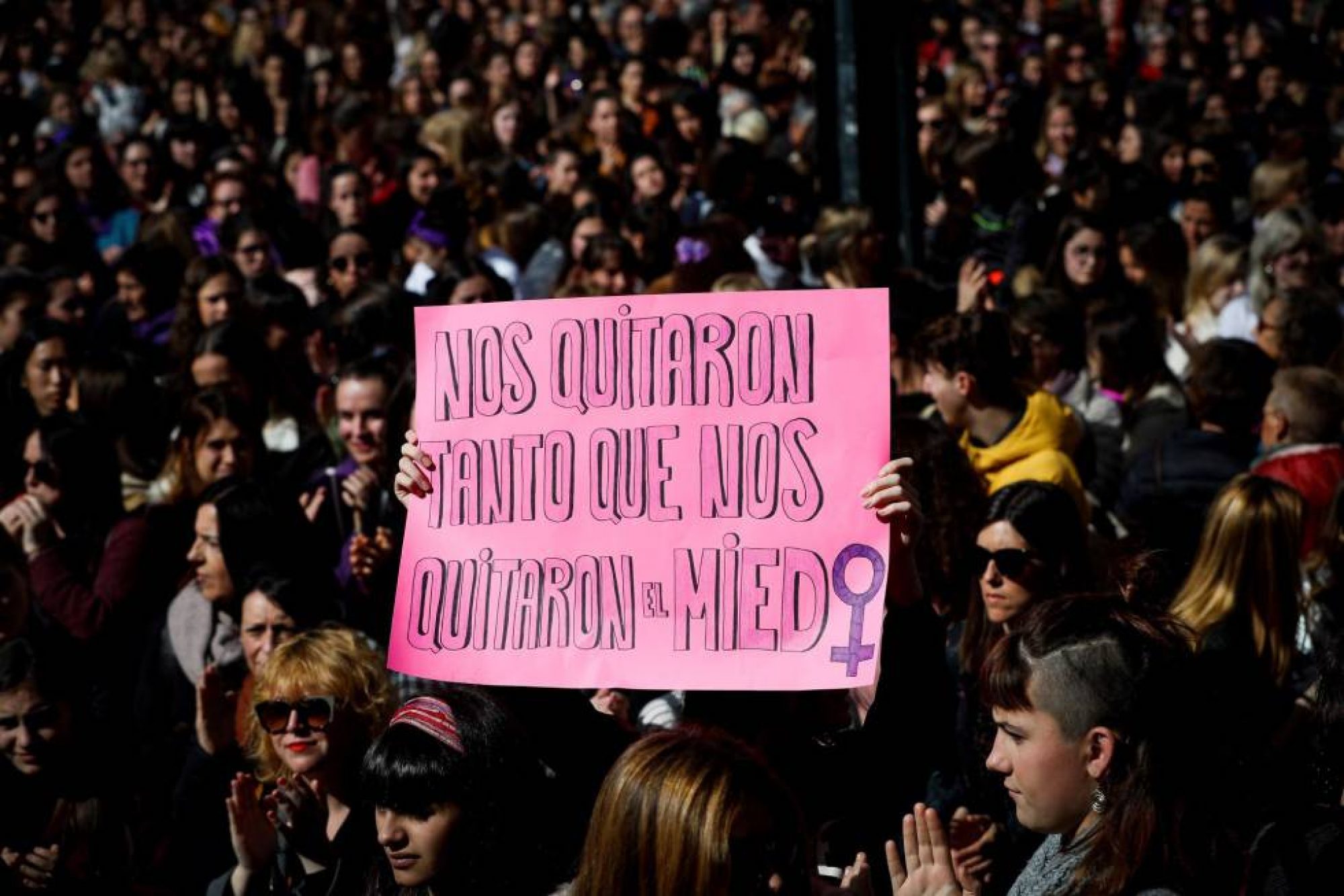 All you need to know about the Spanish Feminist Hurricane

In an eloquent metaphor, Sabrina Cartabia, lawyer and Argentine feminist compares the creation of the Women’s movement with that of Japanese bamboo. The bamboo seed requires a long period of care before it grows:  “A novice gardener could plant a seed that will not sprout because it takes seven years to root, but afterwards, in just six months the plant grows to be more than 30 metres tall”. This metaphor to explain the explosion of feminism in Argentina, also serves to represent the scale of the feminst struggle on this side of the Atlantic, in Spain.

On the 8th of March, the streets were filled with hundreds of thousands of women for the second consecutive year.According to official figures there were more than 375,000 protestors in Madrid, double those of the year before; more than 200,000 people in Barcelona (where only the Independence marches have had more participants in this decade); and 50,000 in provincial capitals like Bilbao and Sevilla, as well as other cities.

Is Spain the most feminist country in the world? Where did all this come from? What happened in 2019 to cause the protestors to return in such numbers?

These roots have begun to bear fruit, fertilized by the emergence of the ultra right-wing ‘Vox’ in the political sphere, who are determined to abolish laws protecting women, such as those relating to Gender Violence and Gender Equality. This resulted in Spain becoming the country with the most female politicians in Europe in the last year. Female ministers put the feminist agenda at the centre of the political agenda, announcing numerous changes after just 8 months in government, although not all changes they would have liked were put in place.

Feminism has been part of everyday conversations. according to Justa Montero, a member of the 8 March commission: “We managed to take it into homes, to ensure that it is talked about over Christmas dinners.” She continues:  “There are those who believe it’s just a surge in support for one day. That the people are called and they come. It is not like that. Throughout the year we have been organising ourselves in all spheres of society, in universities, companies, neighbourhoods, towns etc… Feminism is everywhere and it is able to permeate every single space.”

Now not a single party with representation in Parliament will speak out against feminism. Everyone is trying to join

a movement that has been driven forward above all by the youngest women. In addition, there were more men involved this year. These are some of the key points which explain why Spain continues to be at the centre of this feminist hurricane.

The Evolution of the ‘La Manada’ Case

The Prosecutor of the Spanish Supreme Court ordered a conviction with an 18 month prison sentence for the five men who sexually abused an 18 year old girl in an entrance hall in Pamplona during the San Fermin festival in 2016. This is double the sentence handed down to five men from Seville for Sexual Assault with undue influence. The Manada case was a spark for the first large scale feminist strike in response to the original ruling. The strikers have returned this year, further provoked by the contributions of one of the magistrates presiding over the case, Ricardo González, who described the videos put forward by the prosecution as sex scenes “in an atmosphere of revelry”.  “These incidents continue to impact our society” according to Lucía Avilés, magistrate and spokesperson for the AMJE.  “They focused the feminist agenda on the need to make visible the current and historic normalisation of rape culture based on male hegemony, poor or no sexual and emotional education, easily accessed pornography and a patriarchal justice system”.

The Manada case generated a “Violet revolution” in the Justice system. “Not only in how it is practiced but in the specialised education it requires and its very structure,” according to Avilés. In the last year, changes were made to the group of experts in charge of reviewing criminal sex offences under the Penal Code. Originally it was made up of only men, however it now consists of a female majority. The chant of “Rest easy sister, your mob is here” was heard again on 8 March. This is in part  because the Spanish legal system has a gender, and it is not female, according to Gloria Poyatos, magistrate on the Superior Justice Tribunal of the Canary Islands and president of AMJE. (Association of Female Judges of Spain) “The concept of social values integrated into our laws to justify the provision to legal protection in every case, has been sculpted without integrating the needs, concerns or aspirations of women to the same extent that is gone to, to satisfy men.

“Drunk, alone, I want to get home,” the young women shouted once again on Friday. For them, feminism is something they identify with, explains Sara Naila, a 21 year old student and member of the 8M commission. The media have followed up on other group assaults and they have reported the following data. Allegations of  sexual assault with penetration increased by 22% in Spain in 2018, which saw 1,702 rape offences, as compared with 1,387 in 2017.

“Young adults of 14 or 15 years of age don’t understand being catcalled, being touched at the first party they go to alone,” states Naila as she recalls one particular incident. At one of the protests she participated in against the ruling in the “La Manada” case she passed a mother and her daughter. The mother complained: “Here are these feminists again”. “Mom, what happened to this girl could have happened to me last night when I went out to party,” was the daughter’s reply.

Growing concerns about Sexual violence and its effects, combined with other violence, such as gender-based violence, had led to Spain becoming an international benchmark with a law that is now 15 years old and a state pact that has even generated  interest in the European parliament. Since 2003, there have been 985 women victims, one of them since the beginning of March and 27 children since 2013, when children began to be counted separately. “We are the voices of those who are not here,” the protestors chanted on friday.

The Eruption of Vox

Political scientist, Silvia Clavería has a clear view of what is behind the latest feminist uprising. “Last year, the MeToo movement and the “La Manada” case provoked a revolution in feminist consciousness.” Now, another factor has been added: Vox: “the far right-wing party emerged with an even more anti-femist political agenda than the PP.”

Clavería cited further provocations against the feminist movement: Ciudadanos  and their positioning “on wombs for hire”, PP representative Pablo Casado’s words on abortion and the need for women to “know what they carry inside them”, or the anti-feminist speeches of Santiago Abascal’s party (Vox) and of Judge Francisco Serrano (who was recently convicted of malfeasance, due to a ruling where a child’s holidays were changed so he could accompany his father and go to a procession without the knowledge of the childs mother, who had custody). The gender based violence laws or the people who are working to fight against them have also had an important impact on the spread of the movement.

“Riviera, Casado, you would have been aborted,” chanted the protestors. “Suffragettes fought for decades so that you could vote for Vox!” said a poster. Clavería believes any chance of the feminist movement slowing down ended with the possibility of a right-wing government (a PP, Vox and Ciudadanos alliance) taking control.

At the Centre of the Political Agenda.

It is difficult to imagine that feminism will not be central to the debates in the upcoming elections. As Belén Barreiro, director of 40db (the research agency responsible for the latest  surveys about feminism), explains: “It is the most transversal movement in Spanish society and no party wants to be on the margins. The PP dropped back from the protests for strategic reasons, to differentiate themselves from the left but they didn’t stop making videos and speeches in support of real equality.”

Justa Montero added that it is not enough that parties just speak of feminism: “People are not going to fall for empty promises”. One of the keys to the 8th of March is that it has managed to put women’s lives at the centre of the political agenda.” People are talking about the salary gap and the glass ceiling, but also of the distribution of carers, the need for domestic workers and of waitresses in hotels (known as Las Kellys) to have improved working conditions with contracts that protect their breaks and protect them from unfair dismissals.

Young adults, those with disabilities, grandmothers with granddaughters, civil servants, entrepreneurs, actresses or carers. It does not matter. According to Alicia Miyares, philosopher, feminist writer and spokesperson for “No Somos Vasijas”. “The feminist movement can be found far and wide and it says enough is enough” . “Empowerment is a word that is not well understood” according to Miyares. “It means we will not compromise nor will we accept any nonsense”. To this end, “the media have been crucial.”

Last year it was the involvement of “Las Periodistas paramos” which had the greatest pull. It was the familiar faces like Ana Rosa Quintana (who wasn’t at the strike this year) and the voices of Pepa Bueno and Ángels Barceló (who did return to support the protests this year), which had the greatest influence. In 2019, journalists and broadcasters have joined forces again in recognition of the 8th of March events. “The media drive is amazing and it is a responsibility” according to Miyares. “They changed the way gender-based violence is understood and now they can continue reporting the reality of this violence and clarify the feminist messages.”